This match report was supposed to be in Contested Ground #2 but Phil fucked up and forgot to include it. Sorry! Hopefully it works OK as a blog post instead. Thanks to Wex for putting this together. 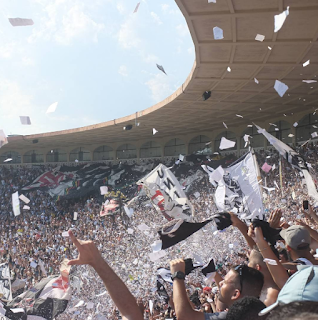 I first learned of Vasco da Gama via YouTube. Juninho used to play for them (not the Boro one, the free kick one) and they once flogged Man United's treble winning late 90s team. So when it came time to chose a Brazil team to tenuously follow, the choice was pretty straightforward. The other thing about them is they have an amazing history, which is not so much about winning titles. When football was an aristocratic game, Vasco gained promoted to the first division and won the league at the first opportunity. This title meant they were the first club to win the league with black players. The elite clubs of Rio de Janeiro did not like it and formed a new league, which conditioned participation on grounds of class – Vasco would not be allowed to compete unless they de-registered 12 players. The president of the club refused to accept the conditions and wrote a letter now known as the resposta historica, which became a reference point for all sports in the country. Just over 2 years after, the stadium was inaugurated, which is a big deal for Vasco. Even today, they are the only city of Rio team to own their own stadium. The president of Brazil used to use the stadium as a venue for speeches and as it was described to me by a local, the stadium is a piece of not just Vasco's history, but also Brazilian history.

A few years ago there was a bit of chat about the stadium being renovated for the 2016 Olympics.  Increasing the capacity and modernising facilities is probably a no brainer for a lot of clubs, and I believe many Vasco fans would welcome a lick of paint, especially in the bathrooms. However, it would be a shame to change it significantly. The other thing is, when things get renovated, it often takes bloody ages and that could hurt the team. Luckily for me at this time no renovations were taking place and I made it to visit this famous old place.

I was supposed to be a bit better prepared for this game. Carnaval in Rio has not officially started but that means nothing. The searing heat of Rio in January and drinking approx 26 beers the day before had taken some toll. I had enlisted a few people from the hostel who were interested in coming with me to the game, but most were too hungover and bailed. I'd also met a Vasco fan named Joao who was planning on going, but he too bailed when his lift from Niteroi (the city on the other side of the River) fell through. So it was just me and my friend Carl from Manchester who were down.

The stadium is located in Sao Cristovao a traditional nieghbourhood in the north zone of Rio and is only about 4kms from the famous Maracana. I'd been to this suburb a few times before, to visit a big market that is held there. It's not the worst place you could find yourself in Rio, but it definitely has a slightly creepy, zombie film vibe after dark, and the streets surrounding the stadium are confusing if you're on foot. The plan was to take the metro to Sao Cristovao station, and then catch a taxi the last little bit.

By the time we got to stadium, kickoff was very near, and there were still huge queues at the ticket office. At this point we realised how unfeasible queuing would be, and started to think we'd made a huge mistake not planning this better. There were however, two men shouting at us trying to offload their tickets. Initially we ignored them, and thought about trying the visitors side of the stadium, but after 5 minutes or so there was an acceptance that doing business with these guys would be the best way. It was somewhat comforting that these guys weren't really hiding the fact they were re-selling, it was right out the front of one of the gates.

So with our blatantly scalped tickets we went inside. We weren't really in the same section, but the stewards were very blase about this and gave us this look that said 'don't fuckin' worry about it'.  It turned out it wasn't a bad decision to get these tickets, since we were in the Socios section (ie the section for members) which was filled with families and old boys of the nice variety. I'm not sure if I could have handled the lairy section at a time like this, especially since a large portion of it was in the sun. We could tell already it's an excellent stadium to watch football. The stadium has an oddity not seen anymore - it is too skinny to accommodate technical areas on either sides of the pitch as usual, so they are located at one end of the pitch besides the goals. At this side of the pitch the Cristo statue can be seen too - since there's no stand at that end.

Just as we'd settled in, Vasco scored which puts everyone in a nice mood. The bloke selling drinks out of his esky was doing a good trade. Even better, we were situated about 3 metres away from him, so it was possible to pass notes through to him. I don't know if this is normal, but it was absolutely brilliant not having to rush around for drinks at half time or piss people off doing it throughout the game. For some reason there were drinks breaks in this game too, and everyone got a beer during those stoppages.

I was sitting next to a guy who can only be described as Vasco's hype man. He wanted to know what's up with us, why we're here. I was having a particularly bad day at explaining myself and he dubbed me Alemao (German) because I was wearing white Germany shorts. I tried to explain that I was just wearing Vasco's colours, which I think he got, but he decided he was still going to call me Alemao from now on. He was a social butterfly who changed seats multiple times to have chats with people (or perhaps we were in his usual seats?).

The visitors Madureira, who I didnt know a thing about at all, hit back and there was apprehension at half time. On the resumption of the game, Vasco made a change and number 13, a diminutive player who I've since learned is named Yago Pikachu (i've not made this up) was sent on. He had only been with the club for a short time and his work getting forward on our side of the field helped to take control of the game for Vasco. A second, third and fourth goal for Vasco flew in. The scoreboard guy forgot to update to the score from 2-1 to 3-1 for a good 5 minutes. The Colombian striker Riascos scored and did the worm.  Even though the ambulance buggy was on the field three times there was not a second more than 3 minutes injury time.  The whole game felt like a massive throw-back to a long time ago.

We got outside and there was a euphoric atmosphere; street vendors were out, the Vasquinho bars were buzzing and even the cops were sprawled out on top of their cars taking selfies.  And a BBQ had kicked off at the Shell petrol station (!). Kids were waiting around the back for the players.

I spotted the Hype Man again and asked him when the next home game was. He told me it was something like 14 days away.  It has been announced that Vasco will play their match against Flamengo in the Sao Januario, the first time in 11 years that a classic will be held in Vasco's stadium rather than the Maracana, which is more suitable for derbies.  This time I have a ticket for the bleachers section and I will go with Joao and his mates, and will actually remember to take a camera.
Posted by Ten Songs Podcast at 12:47 No comments:

Posted by Ten Songs Podcast at 13:38 No comments:


Issue 1 is sold out. But you can read the zine for free below. If you enjoy it though, consider buying us a half-time cup of tea, yeah?